Socio Education » DIVYABHASKAR NEWS » NEWS ARTICLE » www.divyabhaskar.co.in » 20% reduction in salaries of Tata Sons chairman and all CEOs of the group, for the first time in the company's history

20% reduction in salaries of Tata Sons chairman and all CEOs of the group, for the first time in the company's history

Historic decision / 20% reduction in salaries of Tata Sons chairman and all CEOs of the group, for the first time in the company's history 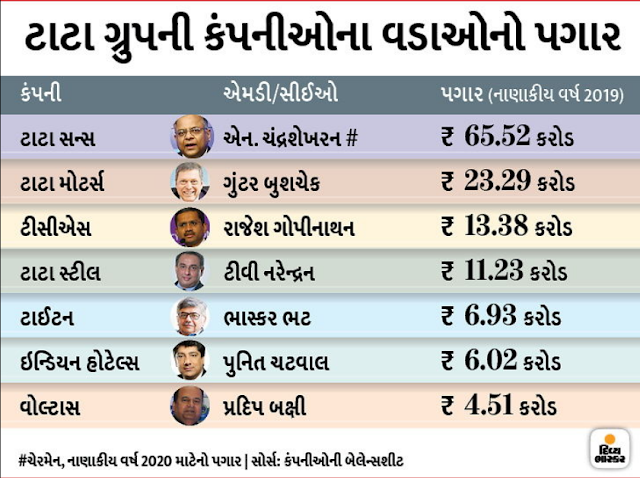 As part of a massive cost-cutting effort to tackle the Corona crisis, Tata Sons has decided to cut the salaries of its chairman and CEOs of all group companies by 20%. For the first time in the history of the Tata group, a decision has been taken to cut salaries. This decision has been taken to set an example to motivate the employees and ensure the professional viability of the organization.

First, the CEO of TCS made the announcement:

According to an ET report, Rajesh Gopinath, CEO of Tata Consultancy Services (TCS), the parent company of the Tata Group, has announced the first pay cut. Earlier, Indian Hotels had said that the company's senior leadership would contribute from its salary this quarter in this time of conflict. According to an executive, the salaries of CEOs and MDs of Tata Steel, Tata Motors, Tata Power, Trent, Tata International, Tata Capital and Volts will also be reduced. Another senior official on the matter said the deduction would apply mainly to the current year's bonus.

This is the first time such a step has been taken to save the business:

"This is the first time in the history of our group that such drastic measures are being taken to protect the business," a top CEO of the group said on condition of anonymity. “We will take all steps that the leadership will ensure with empathy,” he said. As per tradition, the group always takes all measures to protect its lower employees. Recently, Tata Sons chairman N Chandrasekhar said the HR policy, revenue planning and cash flow management of each group of companies would be reviewed.

In FY19, sales of 33 listed companies of the Tata Group increased by 10% to Rs. 7.52 lakh crore. Tata Motors, Tata Steel and TCS accounted for about 82% of the three largest companies in the Tata Group. However, the profits of all 33 companies in this financial year were 20% lower than the previous year. In FY19, Tata Group's profit of Rs. 32,340 crore and Tata Steel Rs. 10,218 crore.

0 C "20% reduction in salaries of Tata Sons chairman and all CEOs of the group, for the first time in the company's history"