Corona to Gujarat Rs. Maharashtra is likely to lose Rs 4.72 lakh crore, with a loss of Rs 2.61 lakh crore

Report / Corona to Gujarat Rs. Maharashtra is likely to lose Rs 4.72 lakh crore, with a loss of Rs 2.61 lakh crore. 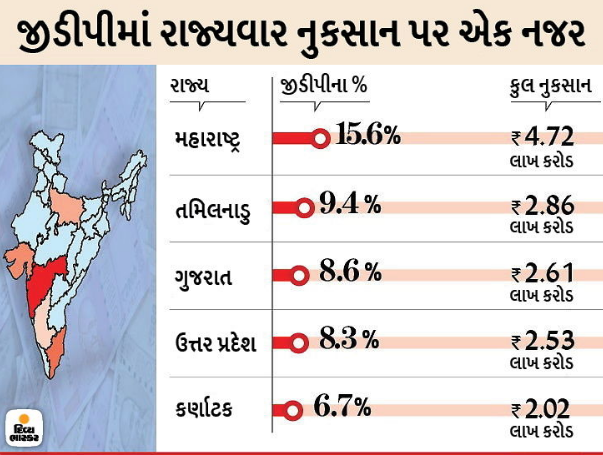 Corona cases are on the rise in the country on the one hand and the economy on the other. If there is one state that has suffered the most from the corona virus, it is Maharashtra. State Bank of India (SBI) released a report on Tuesday. Accordingly, Maharashtra is the largest exporter of Rs. 4.72 lakh crore, Rs. 2.86 lakh crore and Rs. 2.61 lakh crore will be lost.

Based on the country's GDP loss, Gujarat is expected to lose 8.6% :

The lowest losses will be in Andaman and Nicobar Islands:

If we talk about the top 10 cities of the country, these states account for 75% of the total GDP of the country. These three states have the highest number of Kovid-19 cases. According to the report, India has entered the fourth phase of the lockdown. It is now important to understand the effect of the output. When the lockdown was first implemented in the country, our GDP was estimated at 2.6%. It has been steadily declining since then and is now down 4.7%.

50% of the damage will be in red zone areas:

However, the report said that if a bottom-up approach is maintained, GDP growth will be slightly better than previously projected. "According to our estimates, the total Gross State Domestic Product (GSDP) will lose Rs 30.3 lakh crore, which is 13.5% of the total GSDP," the SBI said. 50% of the damage will be in the red zone, which includes the largest cities in India.

80% of the population of the green zone is in rural areas:

The loss of both Orange and Red Zone will be 90% of the total loss. About 80% of the population of the Green Zone lives in rural India, which is completely open to activities. According to the report, GDP could fall below 1.5% in the fourth quarter of FY20. We estimate it to be 1.2%. In FY20, GDP could be 4.2 percent.

This time there will be more difference between GVA and GDP:

"The interesting thing right now is that there is a gap between GDP and GVA (Gross Value Added) growth," the report said. Usually there is not much difference in the growth of these two. But this time the big loss in indirect taxes has made a big difference between the two. The report estimates that the actual GVA growth rate could be closer to -3.1% in FY2021. The real GDP growth rate during this period will be -6.8%.

Net in-direct tax is Rs. 10.4 lakh crore will be reduced:

In FY 2021, net in-direct tax will be Rs. 10.4 lakh crore will be reduced. The government could monitor such losses in the third and fourth quarters, the report said. Another package could be announced by the end of this year.