Banasdesi will not accept the milk of the coroned village
9 new cases in Gandhinagar, three members of the same family in Kudasana to Corona, a total of 7026 positive patients in the state
In Ahmedabad, 275 cases, 23 deaths, total positive cases close to 5000
In Gujarat, 1 lakh tests were passed and more than 200 were cured in a single day
There were a total of 1889 deaths in the country out of which 425 were in Gujarat and 321 out of 425 deaths in Gujarat were in Ahmedabad
Every sixth death due to corona in the country is in Ahmedabad, 12% of the total cases in the country are in Gujarat 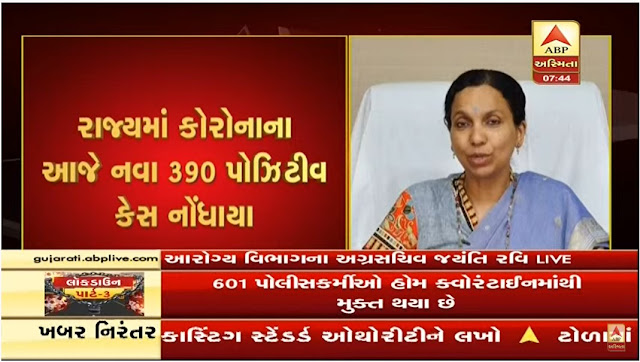 Gandhinagar. 9 new cases have been reported in Gandhinagar. There are three cases of the same family in Kudasan, one girl in Randesan, Nana Chiloda, one case each in Sector 24 and three cases in Kalol. Two more positive cases have been reported in Botad district. With this, the total number of patients in the district has reached 50. In addition, the reports of two more doctors in Jamnagar have come positive. At the same time, the total number of corona positive patients in the state has reached 7026 and the total death toll is 425. With this, a total of 1709 patients have recovered and returned home. 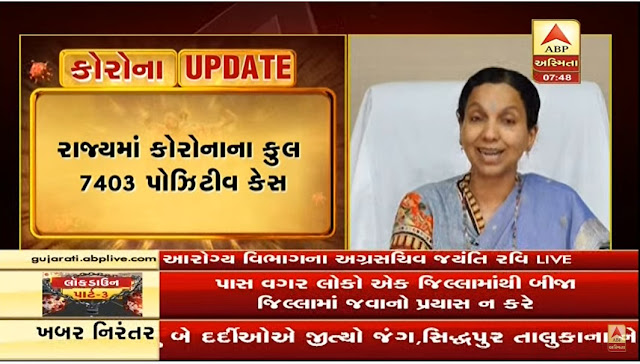 Important events since the morning of May 8th

Workers were sent home from Gandhinagar, 100 workers were left without online booking

From Gandhinagar ST depot this morning once again foreign workers were sent to Uttar Pradesh by ST bus from Sabarmati railway station. But this time more than 100 workers went berserk without online booking. Wandering for hours with family and belongings, these families were questioning the police with high hopes as there was no officer. Sir, we don't know how to pass online ..! Won't take us now ..? !! Do something sir ...! Surviving Corona's wrath, the workers inadvertently set off in a private basket to wait for their homeland for Rosario.

On Thursday, 209 crore positive patients who were undergoing treatment at various hospitals in the state recovered and were discharged. The number of patients who have won the battle against Corona has reached 1709 in Gujarat. This is 24.36 per cent or about a quarter of the total 7,013 positive patients registered so far, including 388 new ones on Thursday. There are now a total of 4,879 active patients in the state who are undergoing treatment and the condition of the remaining 4,853 patients is stable except for those on 26 ventilators so their chances of recovery are higher. The death toll rose to 425 on Thursday with 29 more patients dying.

The situation in Ahmedabad is improving

In this case there were 12 patients who died due to corona alone. This means that now 111 out of 425 patients i.e. more than 25 per cent of the patients were those who did not have any other problem but only died after the condition became serious after being infected with corona. Of the 29 deaths, 23 were in Ahmedabad, four in Surat and one each in Banaskantha and Mehsana. In terms of the number of positive cases, out of 388 new cases, 275 cases have been reported in Ahmedabad, which is slightly less than the number reported on Wednesday. Thus, the situation in Ahmedabad seems to be improving.


A total of 5,362 samples were tested in Gujarat in the last 24 hours. With this, a total of 1,00,553 tests have been conducted in the state so far. Out of which 7013 tested positive. The average current in the state is approximately seven per cent of the total samples coming positive. The 66,861 patients who came into direct contact with corona positive patients are currently quarantined. These patients are being given medicine to boost the immune system of Ayurveda and Homeopathy. If we compare with the statistics of the whole country, 25% of the deaths in the country are in Gujarat alone and 75% of the deaths in Gujarat are in Ahmedabad. Meanwhile, the number of tests in the state on Thursday has also crossed 1 lakh. The good news is that on Thursday, more than 200 patients recovered and returned home in one day. However, 26 patients are still on the ventilator.

In the last 24 hours, 388 new positive cases of Covid 19 have been reported, said Jayanti Ravi, front health secretary, giving an update on corona cases in the state. Of these, 275 cases were reported in Ahmedabad, 45 in Surat, 25 in Aravalli, 19 in Vadodara, 5 in Gandhinagar, 4 in Dahod, 4 in Jamnagar, 3 in Banaskantha, 3 in Kheda and 2 in Rajkot, 1-1 in Bhavnagar, Devbhoomi, Dwarka and Rajasthan. While 12 patients died due to corona and 17 patients died due to high risk, other diseases and corona. As many as 209 patients have recovered and returned home today. Of the total 7,013 patients reported so far, 26 are on ventilator and 4,853 are stable. While 1709 patients were discharged and 425 died. When it comes to testing, we have done 1 lakh 553 tests so far. Out of which 7013 reports were positive and 9,3540 reports were negative.

Stay connected with www.socioeducation.in for latest updates
Important: Please always Check and Confirm the above details with the official website and Advertisement / Notification.
Tag : Coronavirus in India Gujarat, Covid-19