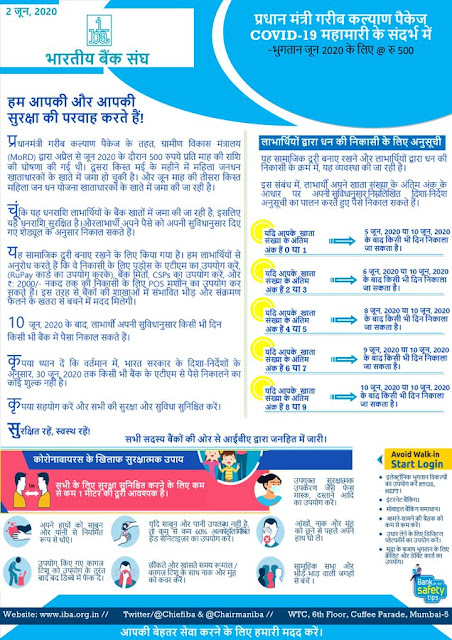 Plans are afoot to provide rations and financial assistance to the poor amid a lockdown in times of crisis. PMJDY's women account holders are being sent Rs 500 installments to banks in June under the Prime Minister's Poor Welfare Package. The Indian Banks Association has given this information by tweeting. As stated in the tweet, your money is completely safe. To avoid crowding in the branches of the banks, according to the time table given below, to collect money from the branch, CSP, bank friends. The government has started depositing the third installment of Rs 500 in the accounts of women account holders. Find out when the money will be in your account ....

The Prime Minister's poor welfare package is part of this 500 rupees:

According to the finance minister, at the end of March, it was announced that all women account holders under the Pradhan Mantri Jandhan Yojana (PMJDY) would be given a gratuity of Rs 500 per month (ex-gratia) for three months. This is part of the Rs 1.7 lakh crore Prime Minister's Poor Welfare Package.

In this package, the government will provide Rs 500 per month to Jandhan account holders for three months and free food, pulses and cooking gas cylinders to the poor. Farmers and the elderly were also provided cash assistance under the scheme so that they could get some relief in times of crisis.